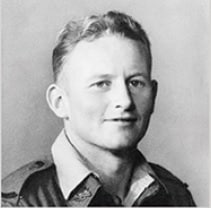 Born in Leichhardt, Mackey attended Christian Brothers’ High School Lewisham, before enlisting in the Second Australian Imperial Force, falsifying his age to do so.

He embarked with the 2/3rd Pioneer Battalion in November 1941. Initially posted to Darwin, he served in Syria and in the later operations at El Alamein. He also took part in the New Guinea campaign where his company commander described him as an outstanding junior leader who exhibited moral and physical courage. Promoted to acting corporal in October 1944, he led his battalion in the landing on Tarakan Island, Borneo, the battalion’s final campaign.

By his exceptional bravery and complete disregard for his own life, Corporal Mackey, 21, was largely responsible for the death of seven enemy soldiers and the elimination of two machine-gun posts before being mortally wounded. His fearless action and outstanding courage were an inspiration to the whole battalion.

Mackey was posthumously awarded the Victoria Cross, and service medals for the Second World War. He is one of only 100 Australians that have been awarded Australia’s highest military honour for acts of bravery in wartime.